My submission is long overdue. No excuses; I’ve just never got round to it. It’s been on my to do list for a long time but, even when I served as a Trustee on the ALT Central Executive, I never quite found the motivation to do it.

I’ve been thinking about that while producing this website. It’s primarily been a lack of motivation (not needing it) coupled with a lack of enthusiasm for portfolio writing! I’m very comfortable writing reports, business cases and the like but reflective writing is not something I enjoy. This has been hard work.

I got a new job last summer and naturally found myself reflecting on my 4 and-a-half years as the Head of Technology-Enhanced Learning then Head of Learning Technology at the University of West London (UWL). Some of this portfolio was written then (summer 2018), some sections and amendments more recently, after a break to settle into my new role as Digital Learning Director at London College of Communication (LCC).

Until 2012 I worked as a learning technologist. I wrote a blog post in 2008 to answer the question what do I do? Since 2012 I have worked in managerial roles and it is the more recent work from this period that forms this portfolio.

I have been actively involved in the learning technology community since I discovered it when I joined UNL in 2002. I attended my first ALT Conference (in Sunderland) that year and soon after my first M25 Learning Technology Group meeting (which is now an ALT members group). In 2009, while working at LSE, I was encouraged to get more involved with ALT and I joined ALT’s Publications Committee before being elected to serve as a Trustee in 2011. More recently I have been active in the Heads of E-Learning Forum (HeLF) and was on their Steering Group from 2016-18. 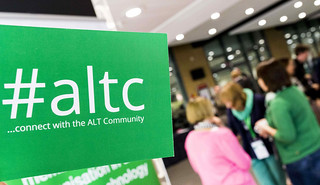